Reading books, Astronomy and Star gazing, Gardening, Music, Photography, Ham Radio and Computer assembly — all these have been my hobbies at different periods in my life.

When I joined the College of Engineering, Trivandrum, my father presented me a  Voigtlander Bessa 120-size folding camera.  In those days, photographic films and prints were costly for middle-class Indians.  So much so, one could sometimes hear a cryptic comment: “If you want to ruin a person, present him with a camera!”  But, I carried on, taking hundreds of photos with my camera.  My doting father never put a brake on my extravagance!

The photo of the full moon shown here has a story behind it.  With the super-sensitive high-zoom digital cameras now available, taking a picture like this is no big deal.  But the situation that I faced in 1955 was very different.  My camera had no zoom, and the fastest B&W film available was only ASA 400.  A Swiss-made WILD T3 0.2″ Astronomical theodolite, which was the best theodolite in our Survey Laboratory, enabled me to take the photo.  The theodolite had a 2.5-inch diameter objective lens, but it had no polar mount or diurnal drive.  The eyepiece was removed, and the theodolite was focused with the camera pressed against the telescope diaphragm, the camera back open, a tracing paper roll wound in place of the film, and the camera shutter kept open at full aperture.  After focusing, the film was wound in the camera, the telescope was adjusted to bring the moon back to the centre of the field of view, then the camera was quickly pressed against the telescope diaphragm, and three exposures of 1/10, 1/5, and 1/2 sec were made.  The 1/5 sec exposure provided the best compromise between adequacy of exposure and sharpness of the moving image.  But for the motion of the image, and the use of a film of inadequate speed, I could have captured a much sharper image.  Anyway, I was happy that my effort with this crude setup produced a reasonably acceptable result !

A small album of my photographs — astronomical photos, as well as photos of general interest — is appended below. 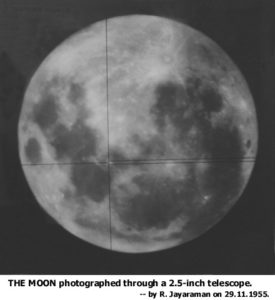 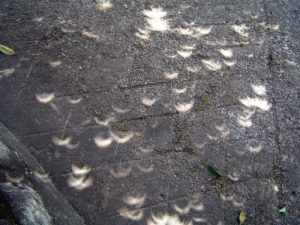 Solar Eclipse: 10th January 2010 – Crescents produced in the backyard by the eclipsed Sun shining through the canopy of a tree. 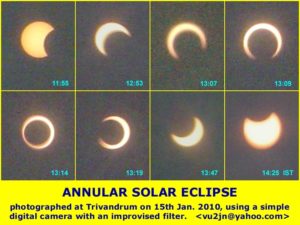 [ Pending to be populated ]

Reading story-books was one of my earliest hobbies.  When I was around 13 years in age, and had started reading bigger English story-books, my grandfather gave me an old book of some 200 pages, titled “The Adventures of Sanford and Merton” and authored by Thomas Day (1748-89). The novel dealt with how a rich, pampered and spoiled boy Merton happens to befriend a poor and honest boy Sanford in unexpected circumstances, and how their growing friendship leads gradually to the reformation of Merton. I greatly enjoyed reading the book, all the while adoring the character of Sanford! Later on, as the years passed by, I forgot about this novel.  A few years ago, when I remembered about this book, downloaded an e-version and glanced through it, I was left wondering how I had managed to read such a tedious novel when I was a boy!

Reading Sherlock Holmes became my favourite pastime when I was studying in junior college.  It was then that my denouement with fiction came in the form of a voluminous classic “Ivanhoe” authored by Sir Walter Scott (1771-1832), and recommended to me by my English teacher. By the time I managed to finish reading this novel (which I had to) written in chaste, flowery English, I had decided to bid adieu to fiction!

After joining the engineering degree course in College of Engineering, Trivandrum, I gradually built up a collection of non-fiction science books dealing with Engineering achievements, Astronomy, Cosmology and the like.  Books like “The Triumphs of Engineering” (Oldhams Press), “The Exploration of Space” (Arthur Clarke), “The Birth and Death of the Sun” (George Gamow), “The Creation of the Universe” (George Gamow), “One, Two, Three…Infinity” (George Gamow), “The Universe and Dr. Einstein” (Lincoln Barnett), “Perfect Symmetry” (Heinz Pagels), “The Tao of Physics” (Fritjof Capra), “What do You care what Other People think?” (Richard Feynman, autobiography), “Beyond Einstein” (Michio Kaku & Jennifer Trainer), “A Brief History of Time” (Stephen Hawking), “The Theory of Everything” (Stephen Hawking), “The Frontier between Physics and Astronomy” (Jayant Narlikar), “The Anthropic Cosmological Principle” (John Barrow and Frank Tipler) and “The Fabric of Reality” (David Deutsch) held deep fascination for me.  I would like to add, in passing, that paperbacks that cost Rs.2 to Rs.3 in the nineteen fifties cost Rs.240 to Rs.360 after the arrival of the 21st century — an inevitable consequence of economic progress!

The two books mentioned last in the previous para continue to intrigue me.  The Anthropic Cosmological Principle points out with a great deal of effort that our universe, which could have evolved in many different ways, happened to [or, was destined to?] evolve in the particular way that suited and enabled the evolution of intelligent life.  John Archibald Wheeler (1911-2008), the discoverer of blackholes, has stated, “No great drama is ever played without an audience.  The grandest of all dramas, the universe, would be meaningless unless it were guaranteed to give rise to at least one intelligent community that would look up in wonder, and try to understand its significance.”  This one sentence neatly summarizes the thrust of the book referred to above.

The Fabric of Reality begins with the apparently well-understood Double-slit experiment in Optics, and then proceeds to show how a full explanation of the diffraction fringes requires us to invoke the ghostly existence of ‘parallel universes’, about which our understanding is still rudimentary.  Having performed the double-slit experiment in my junior college Physics lab., I was shocked to know that I had unknowingly played with parallel universes!  Upon reflection, I realised that the arrival of modern physics has destroyed the apparently strong edifice of classical physics and left it crumbling!  What a change in less than a century!

In many areas of science, the deeper we try to understand a phenomenon, the more complex it gets! Once considered weird, phenomena such as parallel universes, blackholes, gravitational waves and quantum entanglement are now part of the mainstream discourse in science.

At one stage, I started taking interest in reading books on spirituality. Since this happened after I had assimilated some books on modern physics, I couldn’t help noticing the similarities between different spiritual belief systems and parallel universes — we may live in one universe, but have to come to terms with the existence of other parallel universes.

How do scientists react to the unfathomable complexity of the universe?  Albert Einstein (1879-1955) declared: “To know that what is impenetrable to us really exists, manifesting itself as the highest wisdom and the most radiant beauty which our dull faculties can comprehend only in their most primitive forms — this knowledge, this feeling is at the centre of true religiousness.”  This famous statement of a genius in science is considered to be the essence of a scientist’s approach to spirituality.

I became a fan of the late physicist Richard Feynman (1918-88) after reading his autobiography, in which he had stated, “There are many phenomena in this universe that pose questions for which we don’t have definite answers. I am comfortable living with uncertainty, rather than being dogmatic and claiming to have all the answers, which the passage of time might prove to have been unwarranted or even preposterous.”

Interestingly, scientists who are well-known for their penchant for precise observations, are the ones who admit they can put up with uncertainties.  Illuminaries in the spiritual field who deal with profound enigmas of our existence generally seem to have the answers for all our doubts, even where such views appear to us to be mutually discordant.   Perhaps we have to evolve further to resolve these enigmas.  The authors of The Anthropic Cosmological Principle conclude their narrative with the hope that, eventually, science and spirituality will meet in unravelling the ultimate reality of our existence in this universe.

In this Section, some of my articles of general interest are referred to, and copies of a few are attached.